History of my self-tracking

The Way Back Machine has a copy of this original post.

I have been interested in self-tracking ever since I started posting links to the Internet in 2002, when I attached a + or a – to each link depending on its impact on my morale. It turns out, whatever makes me want to post a link to something also tends to impact my morale in a positive way, and so my first Morale-O-Meter almost always showed my morale as 10 (tracking the last 10 links posted).

Later, around 2005, I started a more general Morale-O-Meter that allowed me to rate my morale each day from 1-10. In addition, I also counted the number of alcoholic drinks and caffienated drinks I had, the number of hours of sleep, and my general “health” (1-10, 10 being healthiest). It created a graph that looked something like this: 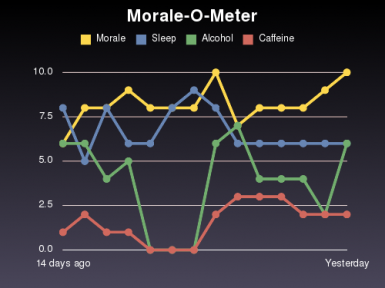 The coincidence of this graph was that all of the inputs could be displayed on the same 1-10 scale, and so it tended to make it easy to believe that the inputs could in some way be correlated. After doing this for about 3 years though, except for minor correlations between number of alcoholic drinks and amount of sleep, there were no deep insights.

I eventually opened this up to anyone who wanted to track along these same 4 axes, which was mildly successful and interesting, but I never really wholly supported the idea because for some reason I didn’t think that these particular numbers were going to ever lead to an epiphany.

Over the last couple years, self-tracking has gotten a lot more attention and interest. Blogs like Quantified Self have been highlighting a number of different ways that self-tracking is taking off. Sites like Daytum, Me-trics, and Happy Factor are making it easier and easier to join in the fun.

The biggest hurdle to self-tracking is motivation. By making it fun (and in some cases social), the hurdle comes down and more people are able to enjoy the benefits.

A fitness function is, I think, the thing that self-trackers should strive for. From Wikipedia: “An ideal fitness function correlates closely with the algorithm’s goal, and yet may be computed quickly.” In an abstract sense, fitness functions handle any number of inputs, and output a number that is correlated with the overall fitness of the inputs. For example, a simple one might be adding (hours of sleep + morale + health – alcoholic drinks). Some people might say that as that number goes up, so does the overall fitness of the person. Of course, there are flaws… for example, sleeping 24 hours a day would give you a pretty high score, but would generally result in a pretty unhealthy lifestyle.

So, you’d have to perhaps grade sleep based on how close your sleep was to 8 hours a night. And, maybe allow one or two alcoholic drinks as healthy, with a penalty for going over that.

And maybe simply grading “health” is too abstract to really rely on, maybe it should track your blood pressure, heart rate, number of times you exercised, glasses of water, etc.

You can see how the fitness function can get a little crazy.

A fitness function that was both well-designed AND within reason in terms of amount of effort required to gather the data (that’s where the “gathered quickly” part of the Wikipedia quote becomes relevant) would be highly valuable. It would give you a score, and a score would allow you to attempt to optimize it. The fact that the fitness function in some ways obscures the inputs is also helpful in the sense that it makes it more difficult to explicitly “game”.

I’m still balancing on that thin rope between finding the right inputs, the right tools, and the right reasons to continue self-tracking. Right now, Happy Factor is the only publicly available tool I’m using regularly. I am hoping that they allow export of data in the future, as it’s pretty silly to have that live on a server somewhere in a way that can’t even be shared with friends.

At the same time, I’m working on my own personal fitness function in a Google Docs spreadsheet. I input my weight, stress levels, exercise, and completion of a number of personal goals (like hosting potlucks, working on my iPhone apps, cooking, talking with family, etc) and have each input go into a formula that outputs a 0 or a 1. For example, if my weight is within my goal weight range, I get a 1. If I exercise more than once a week, I get a 1.

This then all gets added up on a weekly basis and graphed into something like this: 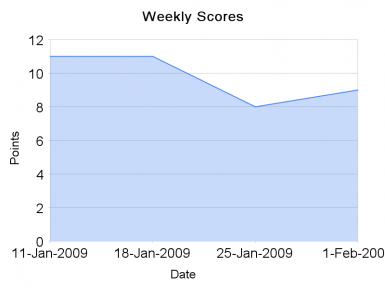 I’m still adjusting it week by week, and hope that eventually it will be possible to actually trust the output of this fitness function to relate my true fitness in life. The goal being a well-balanced, healthy, creative life shared with family and friends.

It’s definitely a work in progress.

Added to the Self-tracking and Game Theory piles.
February 7, 2009
ABOUT ME