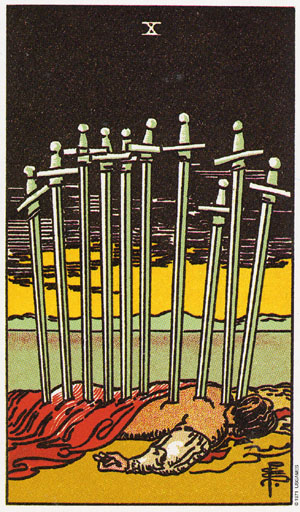 Light: Seeing the signs that you’ve reached your limits. Paying attention to what your body is trying to tell you. Giving in to the need for rest and renewal. Acknowledging that you’ve hit bottom. Committing to a turnaround. Knowing the worst is over.

Shadow: Accepting defeat prematurely. Driving yourself to total exhaustion, especially mentally. Experiencing a mental breakdown. Obsessing on a problem to the breaking point. Giving up. Refusing to move from thought to action. Deeply unhealthy thoughts.

Personal Growth: Failure is a cruel but powerful teacher. When possible, make corrections before hitting bottom. If that time has passed, the mature thing to do is accept consequences, resolve to do better, and start the process of making amends. As they say: live one day at a time.

Work: Know when to say when. Continuing to take on more work and more responsibility is not the answer here. Be honest about your limits. If they’ve been exceeded, ask for relief. Diverting some of the work may mean eating some crow, but beats a complete systems failure later on.

Spirituality: It’s hard to keep your eyes on heaven when you’re face-down on the ground. When darkness overwhelms us, we may be tempted to abandon Spirit entirely. Finding just one thing to be thankful for, though, may provide you with the key to turning things around.

Fortune-Telling: Disaster. Put off plans and do not take action until omens are better.

Fool's Journey: The main character must acknowledge that all is apparently lost.

The Number 10: The End: finality, completion, the end of a cycle, beginning of a new one.

Swords in Back: Optimistic users of the RWS claim the swords on the 10 of Swords pierce the pitiful figure’s charkas, yielding enlightenment through trial. Other decks show the figure face-up, suggesting the additional agony of seeing a bad situation coming.

Dark Skies: RWS-inspired decks often depict a sunset (or sunrise) in the background of the 10 of Swords, suggesting that a change of some kind is at hand, but only after hitting rock bottom.