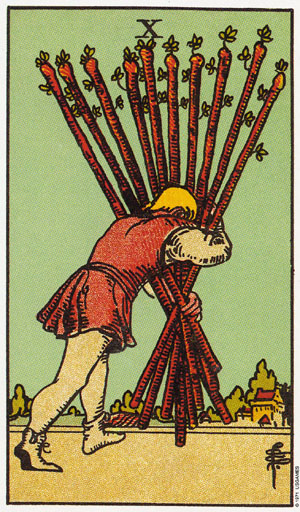 Light: Holding your own in extreme circumstances. Helping others carry their burdens. Coming to the aid of the oppressed. Knowing and being honest about your own limits. Recognizing when you are not well-suited for a particular task.

Shadow: Taking on more work than you know you can handle. Refusing to say “No” when you’re already overloaded. Making a habit of working overtime. Shielding others from facing the consequences of their own poor judgment. Over-extending yourself on a regular basis.

Personal Growth: Knowing your own limits is a sign of maturity. Don’t take on more than you can reliably handle. It’s better to be respected for saying “No” than hated for saying “Yes” and failing to deliver. When unreasonable demands are made, point them out and sidestep them.

Work: Over-extending yourself on a regular basis is not a sign of strength: it’s evidence of poor judgment. You cannot perform at your best when exhausted. There are too many irons in the fire. Review your values and make tough choices, letting go of work that isn’t critical.

Relationships: Some relationships become a burden. When this happens, have the presence of mind to put them aside. Relationships involve more than one person. When you’ve done all you can do to make a relationship a success, there’s no shame in withdrawing from a bad situation.

Spirituality: When we are exhausted, we tend to feel disconnected from Spirit. Restore yourself (and your spirit) by scheduling regular quiet time. Guard this appointment with contemplative silence as jealously as you would an appointment with a life-saving doctor. Disconnect—and reconnect.

Fortune-Telling: You’re worn out! Back off, take a time out, and let someone else handle things for a while.

Fool's Journey: The main character attempts a task he is not well-suited for, with disastrous results.

The Number 10: The End: finality, completion, the end of a cycle, beginning of a new one.

Overburdened Figure: Most RWS-inspired decks depict the figure in 10 of Wands as a stooped, overburdened figure. He has gone as far as sheer will can take him; he is on the verge of collapse. There comes a point when too much is too much, and it may be time to re-evaluate the approach to the problem.

Distant Village: Some RWS-inspired decks depict a distant village in the background of the 10 of Wands and on the 2 of Coins. The village is the light at the end of the tunnel: a reminder that the destination is close at hand. The way out' may be as simple as declining an opportunity you lack the time or energy to complete. In the case of the 4 of coins, the distant village can be interpreted as a city that the king holds dear and is unable to let go of, much like the coins in his arms.